Multiple reports suggest that Apple is developing an augmented reality headset as well as smart glasses, and a newly granted Apple patent may provide a clue about one of the potential features that could be included in the latter device. 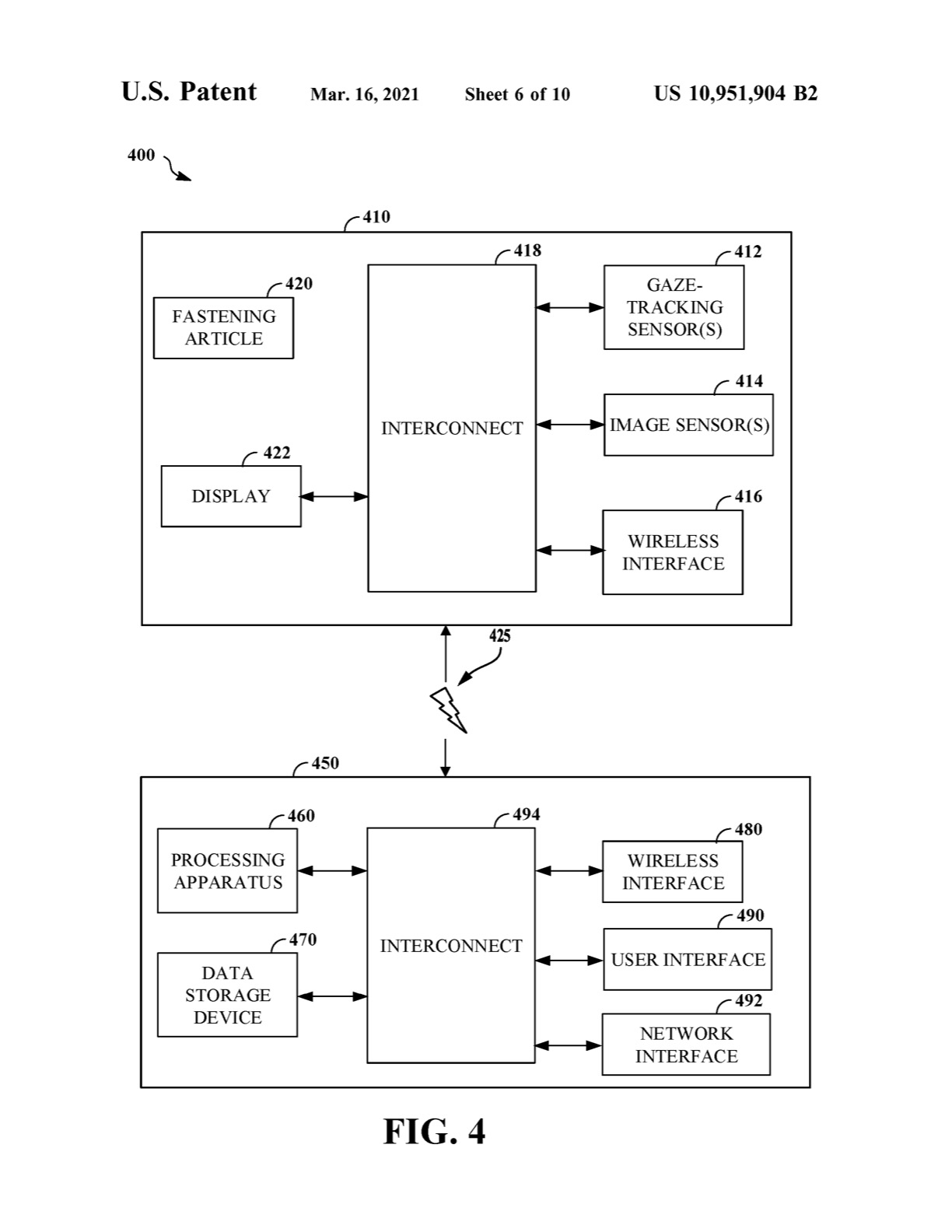 The U.S. Patent and Trademark Office on Tuesday granted Apple a patent describing “systems and methods for gaze-driven recording of video.”

Apple’s patent notes that head-mounted displays are used to provide virtual reality, augmented reality, and/or mixed reality experiences for users, and envisions video from such a device being recorded for later playback or analysis. Specifically, it envisions such a system in smart glasses, where the use of built-in gaze-tracking sensors could provide an indication of where a person is currently looking, which could direct a built-in camera to record the scene where the user’s eyes are trained, instead of simply recording what’s in front of the user.

The patent envisions a system with one or more gaze-tracking sensors, one or more image sensors, and a processing apparatus configured to access the gaze data captured. This apparatus would apply a temporal filter to the gaze data to obtain a “smoothed gaze estimate,” which would allow it to determine a region of interest based on the sensors. The system would then apply signal processing to the video based on the region of interest to obtain an enhanced recording that could mitigate the impact of rapid-movement eye saccades.

According to the patent, the system would consist of a pair of smart glasses and a separate connected device for power and storage, which could be interpreted to mean an iPhone, iPad or Mac. 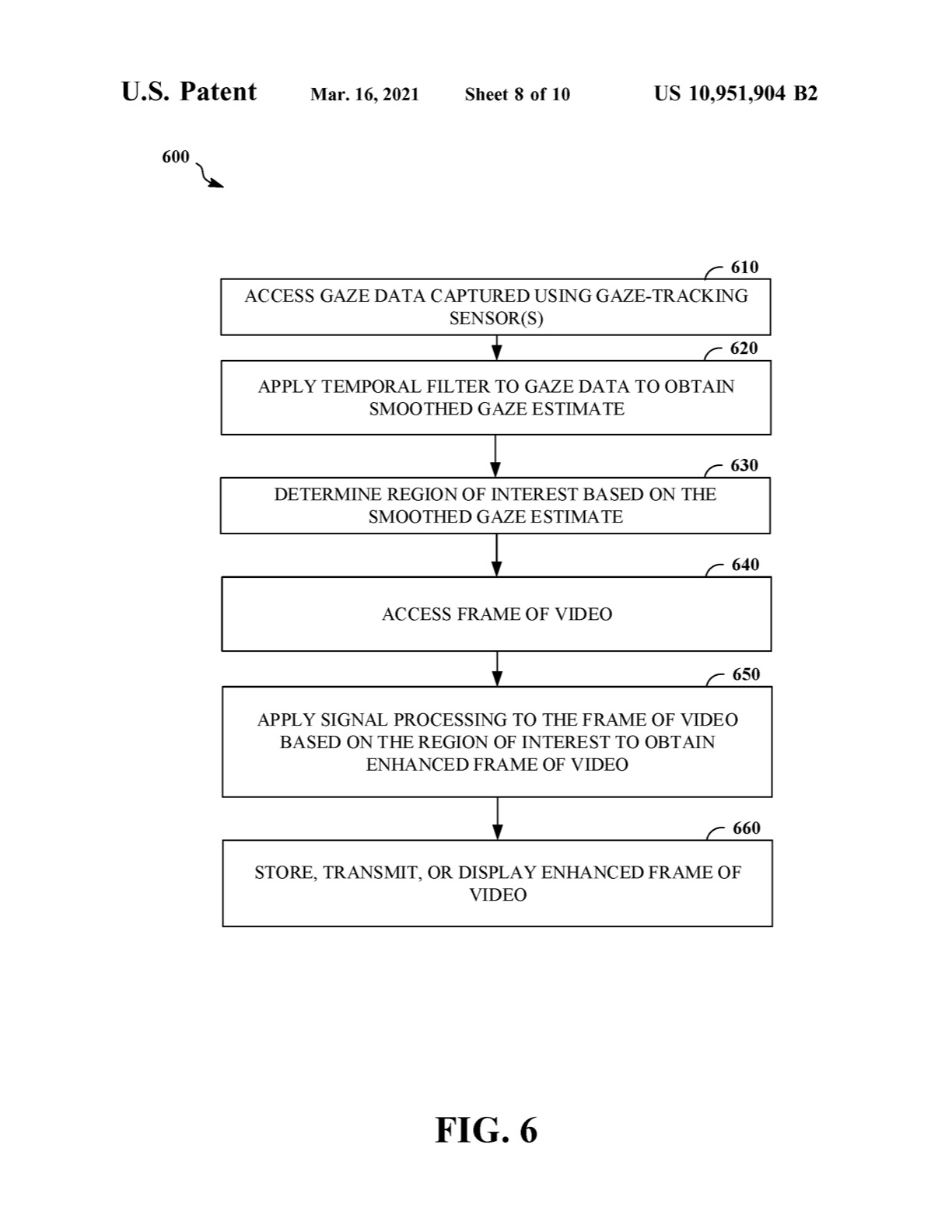 The invention harks back to another patent filed last month in which an eye tracking system is used for detecting the position and movements of a user’s eyes in smart glasses and other head-mounted displays.

In the latter patent, Apple envisages the eye tracking system being used to analyze the position and movements of the user’s eyes, or to detect other information such as pupil dilation. In one example, identifying the point of the user’s gaze allows for interaction with content shown on the near-eye display of the head-mounted display, while another application includes the creation of eye image animations that could be used for digital avatars visible to other users in a mixed-reality communal environment.

Of course, Apple files numerous patent applications every week, and many of these inventions do not see the light of day. But they do provide a glimpse into the kinds of technologies Apple is exploring for potential use in its upcoming AR/VR products, and based on the rumored launch roadmap for its mixed-reality headset and smart glasses, the company still has plenty of time to implement them.

The Information and Bloomberg have both said that Apple is working on smart glasses AND an AR/VR headset, with the headset to come out in first followed by the glasses. Apple analyst Ming-Chi Kuo believes the “mixed reality” headset will come out in 2022, with the Apple Glasses to follow in 2025. The headset is AR/VR, while Apple’s glasses are augmented reality.

The headset is rumored to be similar to Facebook’s Oculus Quest virtual reality headset, but with a sleeker design that uses fabrics and lightweight materials to ensure the headset is comfortable. JP Morgan believes the headset will look similar to other brands of VR headsets, featuring six lenses and an optical LiDAR scanner to map the wearer’s environment. The headset will be targeted at the top end of the consumer market and will be more expensive than others on the market.

The glasses, meanwhile, which are reportedly in an early stage of development, are said to resemble high-end sunglasses with thick frames that house the battery and chips. Kuo expects the AR glasses to be marketed as an ‌iPhone‌ accessory and will primarily take a display role offloading computing, networking, and positioning to the ‌iPhone‌, with the glasses providing a mobile-first “optical see-through AR experience.”

Patently Apple was first to report on the patent being granted today. Apple originally applied for the patent in December 2019.