Home » WEBCHICK » You are reading »

How and why D8 Accelerate is spending your hard-earned cash

Hopefully you’ve heard the news about the Drupal Association‘s new D8 Accelerate grants program, and the fundraising drive we have currently going on. If not, the gist is that the Drupal Association has created a central fund, managed by the Drupal core committers, to fund both “bottom-up” community grants for things like targeted sprints or “bug bounties,” as well as “top-down” spending driven from the core committers on larger strategic initiatives that help accelerate Drupal 8’s release. All D8 Accelerate grants that are provided are tracked centrally at https://assoc.drupal.org/d8accelerate/awarded, including what the money was used for, how much was spent, to whom it went, and a report from the grant recipient(s) that outlines the work that was accomplished.

However, it can be a little hard to parse from that format the larger meaning/context of this work, especially if you don’t spend upwards of 30 hours per week in the core queue like most of these folks. 🙂 As Chief Wearer of Many Hats™, I sit on both the Drupal Association board as well as the committee who manages these funds. This puts me in a good position to provide a bit of “behind the scenes” info on how the funding process works, as well as provide some of the larger story of how these funds are benefitting not only Drupal 8 core, but the larger Drupal ecosystem. 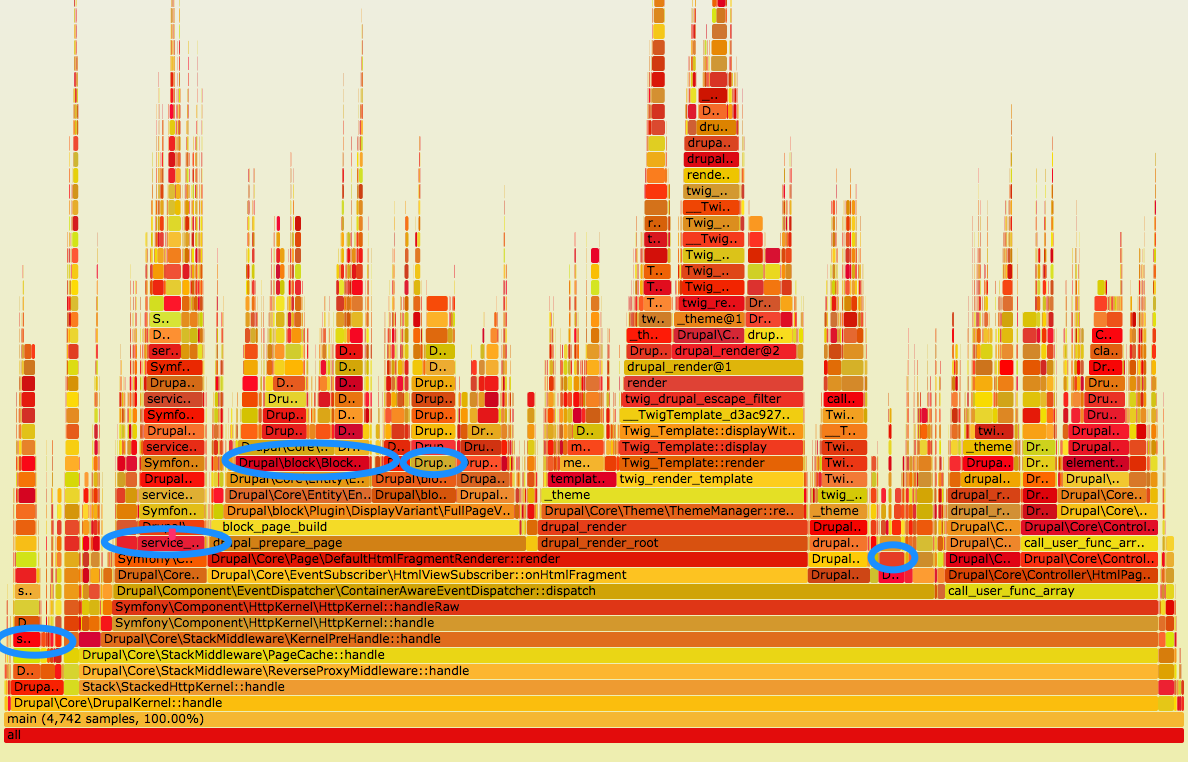 As noted in my post-DrupalCon Bogotá critical issue run-down, performance improvements are a large chunk of the work remaining in Drupal 8. We had deliberately postponed most of this work until post-beta to avoid premature optimization and to allow all the major architectural chunks to be in place. However, we definitely can’t release Drupal 8 while it is much slower than Drupal 7.

The D8 Accelerate fund has been instrumental in not only helping to address critical performance regressions, but also in accelerating the development of Drupal 8’s next-generation cache system.

Or, to sum it up in a cheesy catch-phrase:

The second large focus of D8 Accelerate grants has been around D8 upgrade path blockers. These are extremely strategic, because they unblock a beta-to-beta upgrade path between Drupal 8 releases, which is extremely important for early Drupal 8 adopters.

For example, one large chunk of work D8 Accelerate has funded is in making sure Entity Field API and Views work well together. This is critical for features such as Multilingual, so content shows up in the right languages when expected, and it’s necessary to complete this work prior to providing an upgrade path since it would be horrendous to write hook_update_N() functions for some of the necessary changes.

We’re also exploring other alternatives to provide a beta-to-beta upgrade path to early adopters sooner, which is viable now that the hardest data-model-changing issues are done.

For example, one chunk of work that D8 Accelerate is funding in this area is tightening security around Drupal 8 entity API. Numerous form validation functions in core contain entity-level validation, to the wild dismay of anyone who’s ever tried to implement web services on top of Drupal. The reason that’s bad is because if you attempt to save something using just the Entity API (as you will in a REST API scenario where there are no forms), you will end up skipping validation routines and could end up with invalid and/or insecure data entry. 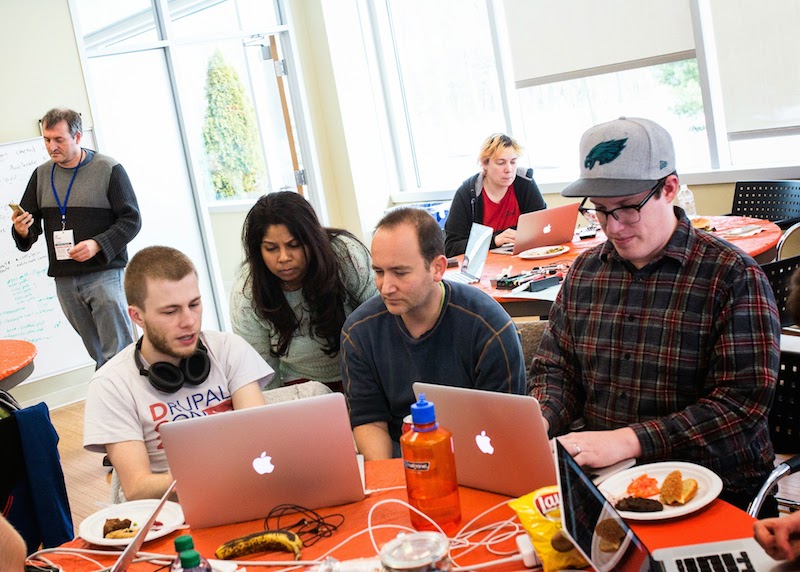 As demonstrated at the Ghent critical issue sprint last year, nothing is better for D8’s velocity than getting a bunch of awesome contributors in the same place to pound on the critical queue together. D8 Accelerate funded a fantastic Menu link critical sprint at DrupalCamp New Jersey which, in addition to turning this area of criticals from “OMGWTFBBQ” to an actionable plan, resulted directly or indirectly in all of the related critical issues in this area being closed, within a couple of weeks after the sprint.

We aim to do more of these same types of targeted sprints throughout the year, the next one being the DrupalCI sprint in a couple of weeks. More on that in a sec.

Our beloved Drupal.org testbot has been showing its age. https://qa.drupal.org/ is still on Drupal 6, and largely on life-support these days. Testbot doesn’t support testing on multiple PHP versions and databases, both of which are Drupal.org (websites/infra) blockers to a Drupal 8 release.

The DrupalCI: Modernizing Testbot Initiative is being driven by numerous devops-inclined community members from around the world. It aims to rebuild testbot from a collection of Drupal modules to a more standard CI stack (using big fancy words like Jenkins and Docker and Puppet and Travis and Silex) that your average PHP/devops folk can both understand and help maintain.

There’s been a lot of work on DrupalCI already, and the upcoming D8 Accelerate sprint on DrupalCI: Modernizing Testbot Initiative will bring all the various contributors together to form DrupalCI Voltron to get an MVP of all the various pieces working together. Actual deployment will happen some time later, and both the new and old testbot will run alongside each other for a good while so any kinks can be worked out while D8 development stays stable.

This particular improvement not only allows Drupal 8 to ship, it also will provide great new functionality to all projects on Drupal.org! The architecture allows for ample room for later expansion as well, so we could start doing things like automated code reviews, performance testing, front-end testing, etc.

Here are some of the awesome Drupal contributors who’ve benefited from these funds:

D8 Accelerate funds are being used not only to fund development work, but also to fund patch reviews as well as more “project management”-y tasks like “triaging” a set of issues to find the truly critical ones, research on different approaches, etc. Wherever possible, the core committers explicitly look for opportunities to fund two people, usually a developer and a patch reviewer, in order to maintain the sanctity of Drupal core’s peer review process.

I think this is great, because it highlights that it’s not just raw PHP that’s going to get Drupal 8 out the door; it’s a joint effort of many complementary skills coming together.

Show me the money!

If you don’t want to donate, that’s totally okay. You’ll still be able to use Drupal 8 all you want, for free, when it’s ready. Donating to this fund is only an opportunity to help make that happen sooner, if that’s sufficiently valuable to you.

For a lot more “deep thinking” around these topics, see:

Many thanks to effulgentsia for his extensive help on this part!

How do you decide on how money gets spent?

The core committers have a well-documented process that explains how we decide what to fund. The TL;DR version is we look at criteria like:

Proposals that answer “yes” to more of these questions than not are more likely to get funded. And the D8 Accelerate team is constantly on the lookout for things that meet this criteria and proactively reaching out to contributors to help get things started.

In short, we take our responsibility with the community’s money very seriously, and have turned down multiple community proposals that were fantastic ideas, but did not fit this criteria. (Where appropriate, we refer folks over to the Community Cultivation Grants instead.)

Also please note that a previous restriction around people asking for funding for their own time has been lifted a month or so back (Thanks, DA!). So if you are a contributor who knows a lot about critical issue #12345, you can request a stipend (initially capped at $500 for five hours) to help push it forward.

If that sounds like you, or you have other creative ideas on how we can get Drupal 8 out faster, apply for a grant today!

Thank you for your support!

I wanted to take the opportunity to give a huge shout-out to the “anchor donors” of the D8 Accelerate campaign:

Thanks to their efforts, every dollar you contribute is already matched by the Drupal Association and these anchor donors, doubling your impact. If you’d like, you can make a donation to my fundraising drive (I’ve set a very ambitious goal of $20,000 since that’s 8% of $250,000 — get it? ;)):

(Note: This is just the amount in my personal fundraiser; the overall fundraiser is at $135K and counting.)

…or, find your favourite Drupal person at https://www.crowdrise.com/d8accelerate/fundraiser and donate to theirs instead, or create your own! 🙂

Thanks as well to the folks who somehow stumbled across it and donated to my fundraiser already—Andreas Radloff, Douglas Reith, and Ian Dunn. I thought Ian’s note was particularly awesome! 😀

And finally, thank YOU for any and all support you can provide that will help us make Drupal 8 the most successful release of Drupal yet! 😀 If you have any other questions, please feel free to ask!

An update on Drupal 8.6 pre-feature freeze

The Drupal Community Working Group: What it is, what it isn't

Plotting data on a Google Map directly from Google Sheets

« The Top 10 Most Common Mistakes That Node.js Developers Make
Advanced Performance Audits with DevTools »
Error: Could not authenticate you.